A camera that captures images of spaces illuminated by wifi

The camera reveals the electromagnetic space of our devices and the shadows that we create within such spaces, in particular our wifi networks which are increasingly found in our daily lives, in coffee shops, offices and homes throughout cities of the developed world.

With the camera we can take real time "photos" and "videos" of wifi and show how our physical structures are illuminated by this particular electromagnetic phenomenon and we are even able to see the shadows that our bodies cast within such "hertzian" spaces.

Radio waves at wifi's wavelength behave similar to light in that they are reflected off solid objects to varying degrees, just as when we see colors we see the light from a light source being reflected off an object into our eyes. And, just as with light, some materials are opaque and some materials are more or less transparent, though the way the materials affect transmission differs (e.g. a plasterboard wall is opaque to light, but pretty much transparent to wifi).

In the age of "englightenment", electromagnetic waves that we knew as "visible light" formed our most ubiquitous medium and was the medium of choice both in "recording" and in "representing". Today, however, we find that increasingly we are creating and responding to non-visual electromagnetic fields - those emanating from our devices and environments. What might a camera obscura for our age look like? What sort of images might it capture? How might it reveal the obscure relationship that we have to our data environments? One of the most important intentions of the project is to develop a 21st century notion of the "picturesque", which encompasses the space of our electromagnetic data bodies. As such, determining where we point our "wifi camera" (which, in its X-ray connotations has various intriguing privacy implications) is as important as determining how to construct it. 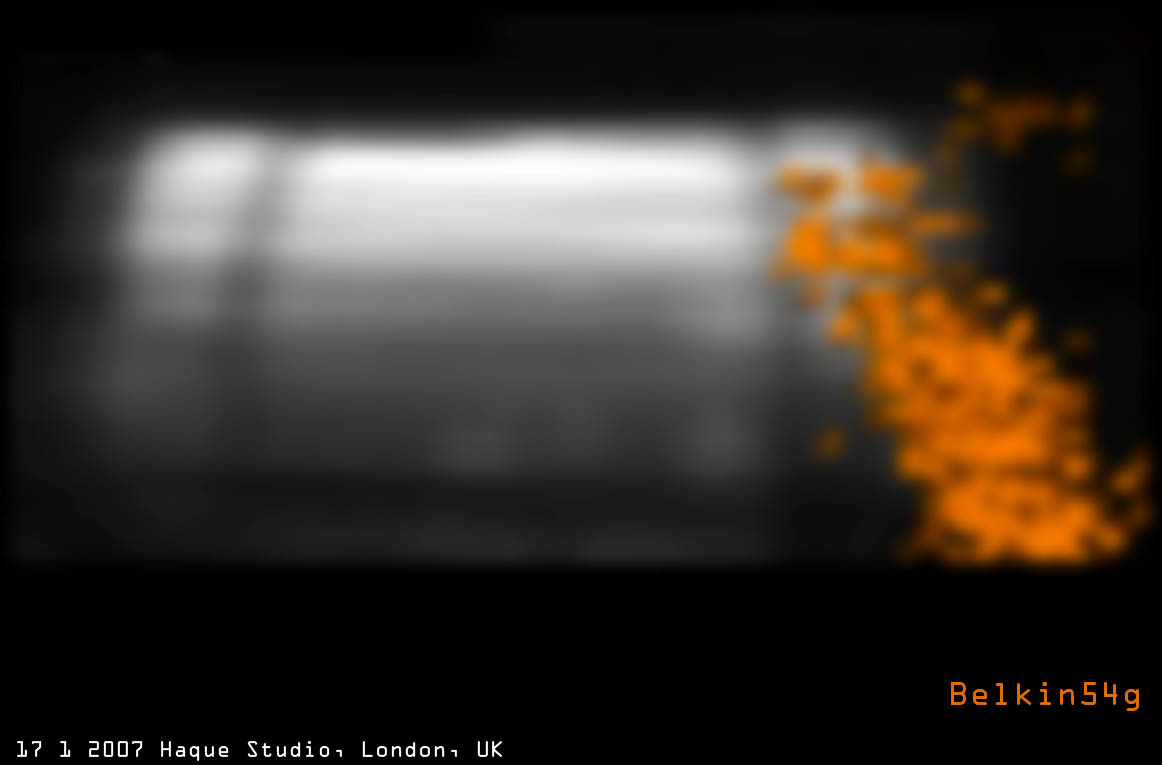 Electromagnetic fields and their relationship to the use of space have recently featured prominently in the explorations of many artists and technologists. In particular the partners on this project have made significant individual contributions to such explorations in both an artistic and scientific context - Usman Haque, with his project Sky Ear, a floating cloud of balloons and mobile phones that responds to electromagnetic fields in the sky; Adam Somlai-Fischer, with the Aether Induction house, a prototype environment that reveals the textures of mobile phone usage; and Bengt Sjölén, with his work on Radio Sensor Nodes, and a general background in communication engineering.

Hertzian space (a term coined by industrial design theorist Anthony Dunne) has also become prominent in the reburgeoning interest in psychogeography. Locative media has largely concentrated on the mapping possibilities of mobile phones and GPS devices. Here we propose instead to focus on the exploration of wifi space - the 802.11 space that is created by our wireless networks, which are increasingly found in coffee shops, offices and homes throughout cities of the developed world.

Most of us are familiar with buildings where signal strength is variable or rooms where mobile phone calls are possible in one corner though it is impossible in another even to make a connection. There are areas in some buildings where one mobile company's network penetrates while others are unable to. These electromagnetic interactions with built fabric are even more clear with the implementation of wireless computer networks that are used to create local area networks.

In such networks the positions of furniture, the thickness and material qualities of walls, doors and windows or the distance from a base station contribute to the varying quality of a network connection. These variations in field strength suggest a richly textured ethereal cartography of hertzian space, a real (i.e. non-virtual) space that affects us but which we only know about through use of our wireless-capable instruments.

The Wifi Camera captures images of this hertzian space, showing a world that is familiar and real, but just beyond human vision.

Wifi Camera has been exhibited worldwide: