An interactive audio/video projection system for choreographed and improvised dance performances, exhibited at IAMAS, the Tokyo Metrolpolitan Museum of Photography and the Hillside Gallery, Tokyo.

The installation consists of multiple video cameras and projectors which allow dancers and performers to interact in realtime with images and sounds created by the system. The images are affected both by sounds and movements – in one implementation, the audience may be used as part of the performance, too. 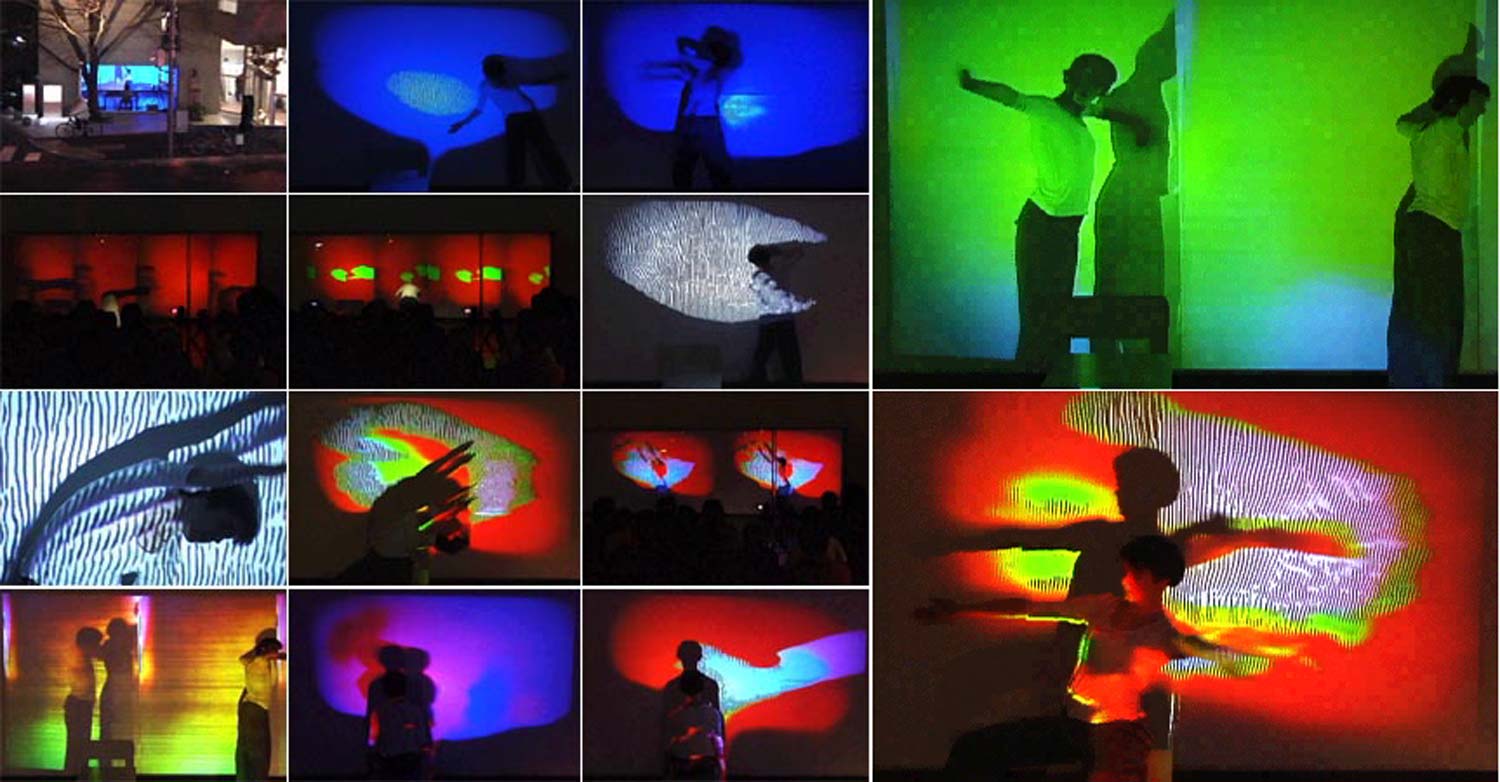 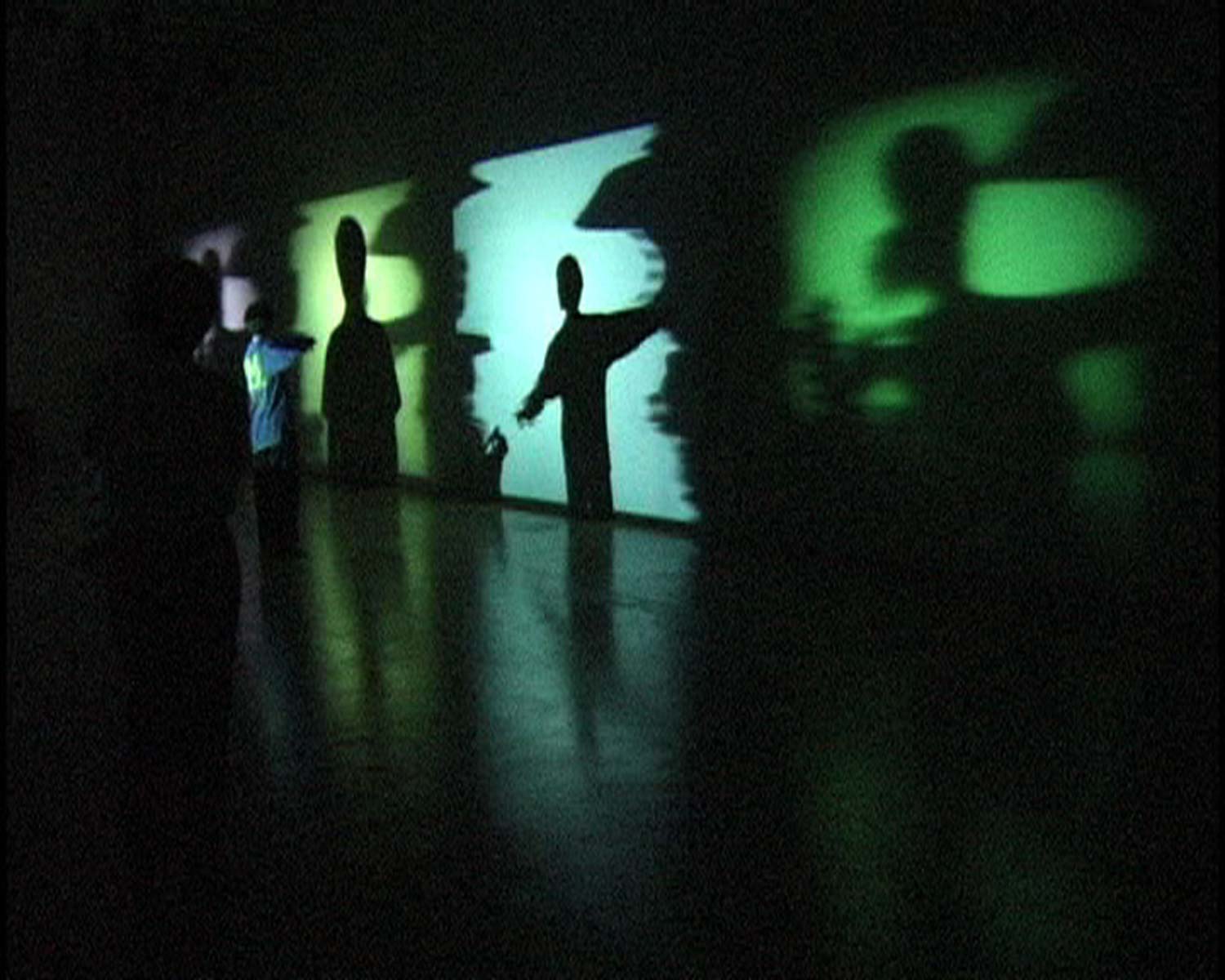 All images and sounds come from within the system itself – that is from the movements and sounds of the performer and from the idiosyncracies of the hardware used.

Concepts explored in the project 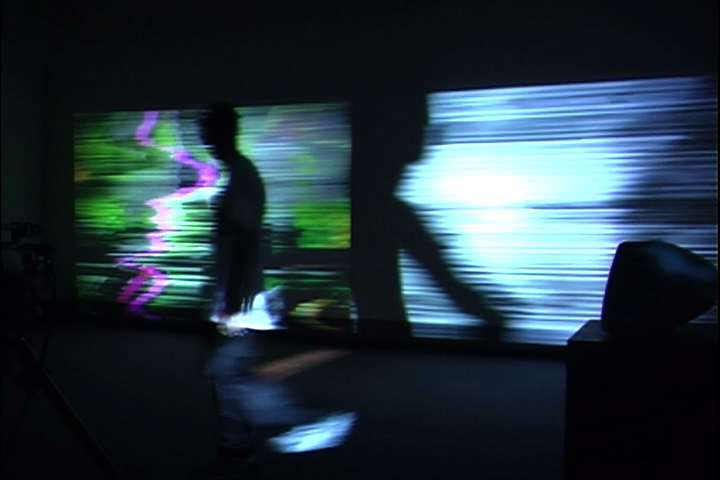 There are no pre-recorded images and no computerised images used in the performance.

Infinitum Ad Nauseam, Tokyo (2000) - The project is a video/audio performance installation which requires the explicit participation of the audience. Essentially, the system uses video and audio feedback to create sounds (from images and movements) and images (from sounds and movements). 4 video cameras, 4 video projectors, 2 video mixers and an audio mixer are used to initiate a massive feedback loop of video-video, video-audio, audio-video and audio to audio. This creates dynamic real-time images and sounds in "conversation" with the visitors or performers. There are no pre-recorded images and no computerised images used in the installation. Performance at the Tokyo Metropolitan Museum of Photography, Japan, in collaboration with Kido Matron Koichi (improvisational dancer) and Yu Nishibori (improvisational noise musician)

Changing Faces of Gesture, Tokyo (2000) with Charlotte Boye-Christensen (Choreographer/Dancer) - The performance consists of one person and 2 to 4 large video projections. Using a simple video feedback system (where a video camera is pointed towards the screen upon which its image is being projected) coupled with an audio feedback system, complex images are created in realtime which are manipulated by the performer's movements. Images created resemble reflections in a puddle; these can be coloured using filters on both the cameras and the video-projectors. Furthermore each projector can be separately controlled to multiply the effects and simulate everything from a solitary dancing figure to a bustling crowd of people. Performance at the Hillside Gallery, Tokyo, Japan.

Infinitum Ad Nauseam, IAMAS (2000) - Performance/installation for 4 cameras and projectors, at IAMAS in which the audience become the performers. 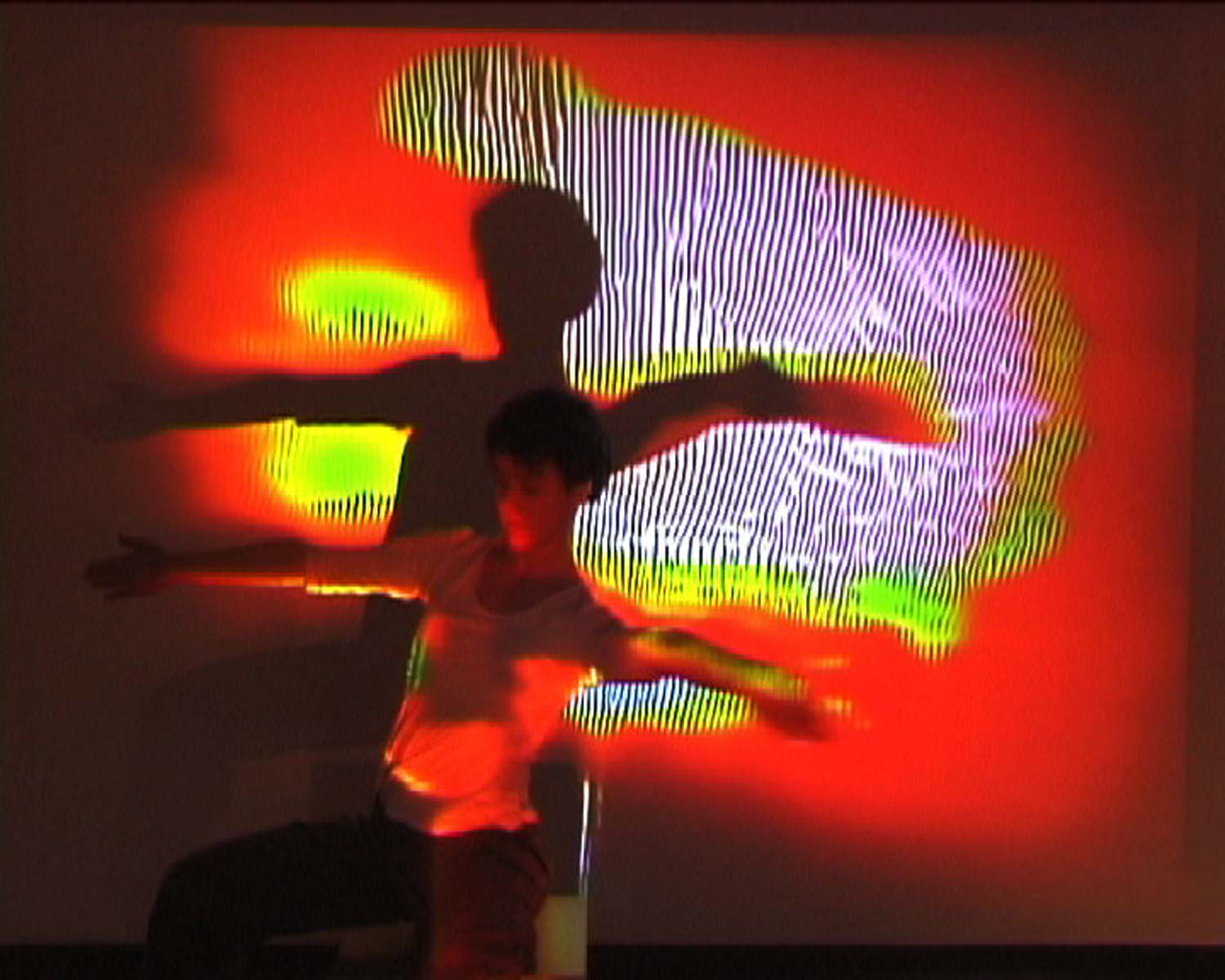 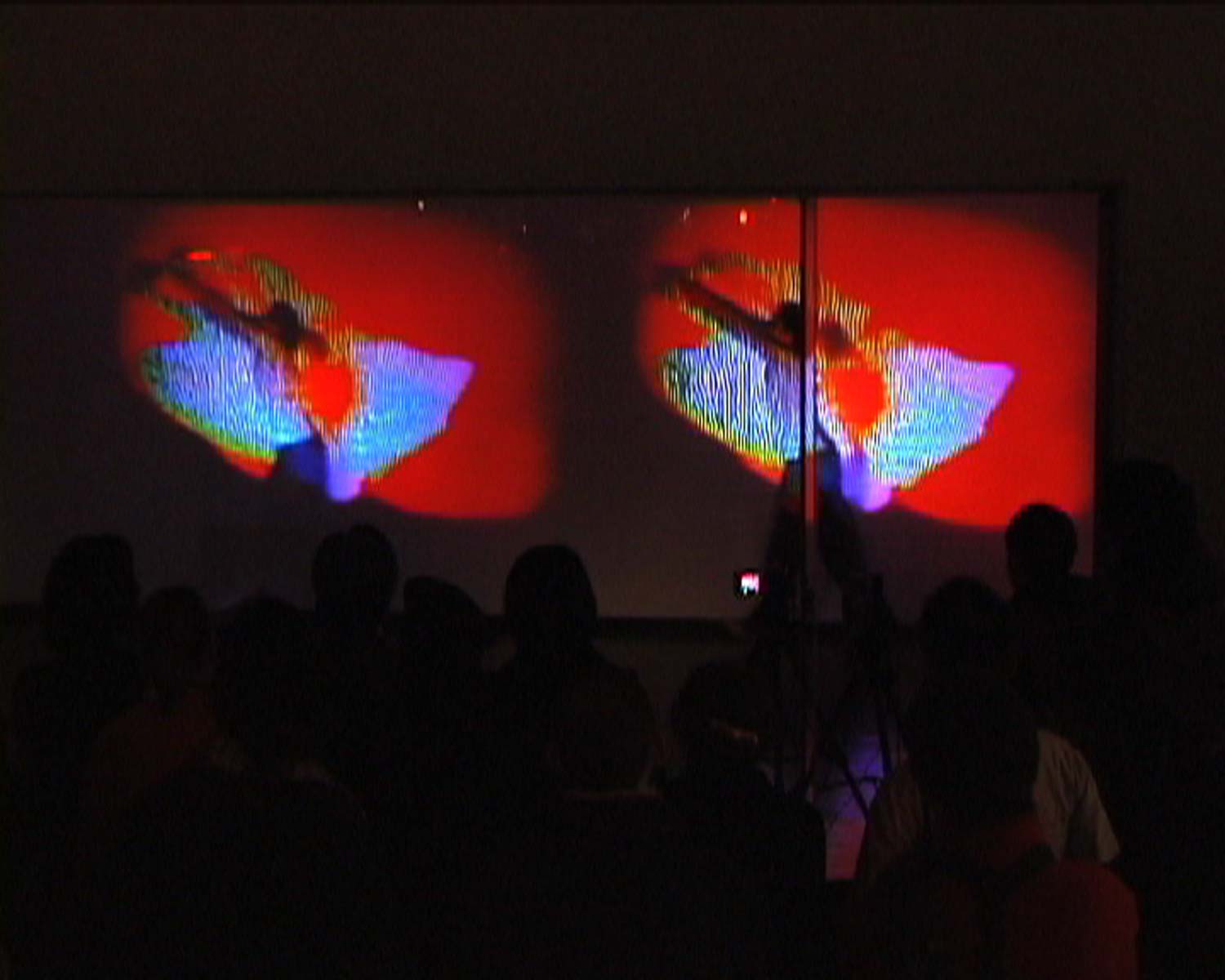 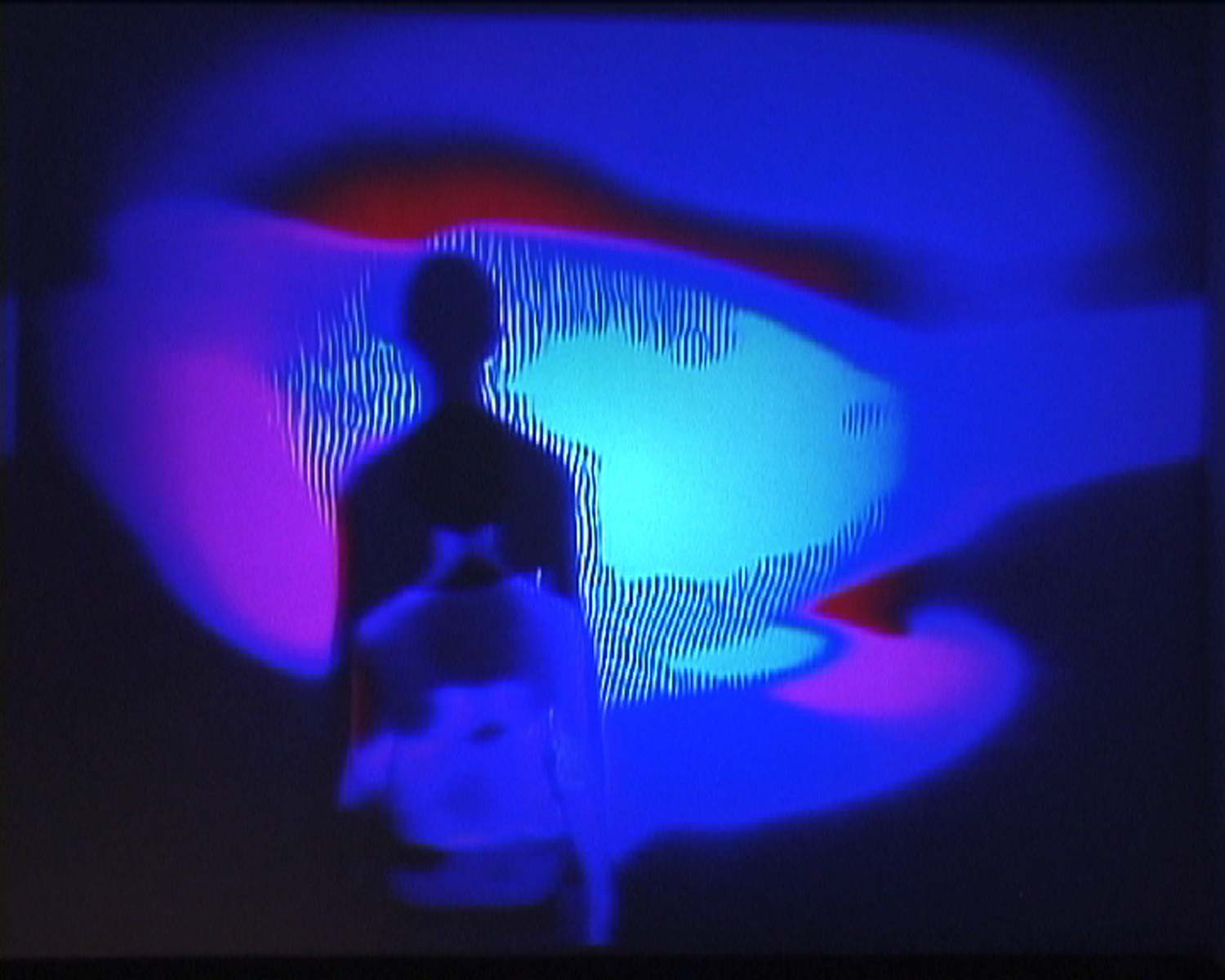